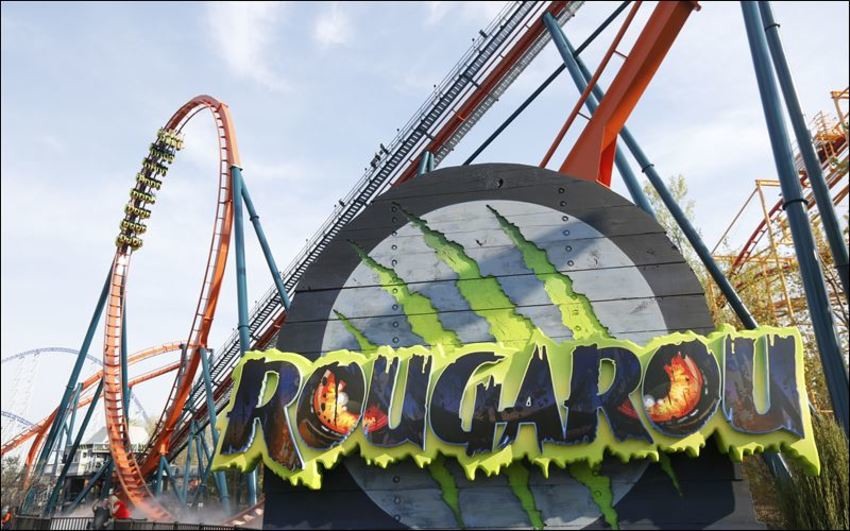 Before many people had poured their first cup of coffee, David Chapman had already been on Cedar Point's new roller coaster more than a dozen times.

How many times, exactly? "I think one too many times," Mr. Chapman said. Even so, he was back on the platform a few minutes later, ready for another go. For the record, that would be ride No. 18. Yes, he was counting.

Cedar Point officially opens today, but on Friday, the park gave coaster enthusiasts and media members an early shot at riding Rougarou, the most anticipated new attraction for 2015. Several hundred jumped at the opportunity to ride the floorless coaster, with the hardiest among them climbing aboard before dawn.

Just as the mythical rougarou of French folklore changes from man to werewolf, the ride bearing its name has undergone a transformation of its own. The coaster zips along the same steel track that the now-retired Mantis used. But rather than standing, as they did on Mantis, Rougarou riders sit with their feet dangling what seems just inches above the orange track.

Beyond changing the car layout, adding a new color scheme, and jazzing up the area around the coaster, everything is essentially the same as it was on Mantis. The ride still starts with a 145-foot-tall hill and tops out at 60 miles per hour. Despite that, park officials say the sensation is entirely new.

"There's some fog, there's some special effects elements, but really the difference is changing the train," said Jason McClure, the park's general manager. "I like to say if you took a box truck and traded it for a Corvette, you're still on the Ohio Turnpike, but it's a completely different experience. And that's what it's like with the floorless trains."

Mr. Chapman, who drove to Sandusky from suburban Detroit, agrees. He predicts Rougarou will be popular. "It's a totally a different type of ride," he said. "You know the layout of it, but the whole experience of the ride is different. It's wonderful."

There are other roller coasters at Cedar Point where riders' feet dangle, but what makes Rougarou different is that you sit suspended directly above the track. That breeds a sort of out-of-control feeling, especially when the coaster dips close to the ground or the lagoon. It also gives you an unusual perspective heading into the four inversions. The coaster doesn't have the sheer speed of Top Thrill Dragster or the smooth ride of Millennium Force, but it has a nice mix of speed, twists, and a surprising amount of G-force.

The Mantis, which debuted in 1996, was billed as a record-breaker, but never became one the park's top coasters. It certainly wasn't eulogized Friday. Many of the coaster enthusiasts remembered it most for being uncomfortable. By revamping and rebranding Mantis, Cedar Point was able to create the all-new experience its visitors crave without spending all that much money. New coasters can cost upward of $20 million, experts estimated Rougarou's transformation could cost less than $2 million.

"It's kind of like making lemonade out of lemons," said Jantzen Simko, a coaster enthusiast from Pittsburgh. "They took a subpar ride that was past its prime and turned it into something good." Mr. Simko said the first half of the ride was great, though he thought the second half was still a little rough for his liking. Still, he enjoyed the ride and had nothing but praise for Cedar Point's parent company. "I think Cedar Fair is doing a good job. They're listening to what people want," he said.

Mr. McClure said people had been asking for a floorless coaster for some time. He said park officials listen to what guests want and balance the thrill-seekers' requests with those who are looking for more leisurely upgrades. Last year, Cedar Point renovated the Gemini midway. In addition to the new coaster, Cedar Point also redid the interior of the historic Hotel Breakers over the winter.

The company expects a strong year. "We're coming off another record year and we look forward to seeing more of that this year. We think the economy is strong. People still love to get out of the house and do things together, and that's something we can provide. We have good early season numbers from a financial side, so we're expecting another great summer," Mr. McClure said.