A rendering of Luna Park's new Thunderbolt roller coaster, the first at the resort spot to include a loop since 1910. This Thunderbolt also pays tribute to Coney Island's original Thunderbolt, made famous by the movie 'Annie Hall' and unceremoniously demolished in 2000. Zamperla

Coney Island has long been a roller coaster pioneer, dating back to the unveiling of LaMarcus Thompson's Gravity Pleasure Switchback Railway in 1884.

The park's amusements will once again get a jolt Monday, when ground is scheduled to be broken for a new roller coaster, the Thunderbolt, the first at the resort spot to include a loop since 1910 (except for a very short-lived coaster in the 1980s). The Thunderbolt is slated to open May 22.

"We have this fantastic machine, and are proud to set it up in Coney Island, the original playground of the U.S.," said Alberto Zamperla, president of the eponymous Italian manufacturer of the ride.

This Thunderbolt also pays tribute to—or gets revenge for—Coney Island's original Thunderbolt, an amusement made famous by the movie "Annie Hall" that was unceremoniously torn down in 2000.

The new addition will be the fourth roller coaster Zamperla has at Coney Island's Luna Park, joining Soarin' Eagle, Steeplechase, and the Tickler (they also operate the historic Cyclone, a wooden coaster built in 1927, which isn't part of Luna Park).

The Thunderbolt roller coaster will reach 56 miles an hour as it takes riders on a vertical lift, a 115-foot vertical drop, then 100-foot vertical loop, then a total of five inversions, including a corkscrew, with only a lap bar holding them in place. "This is going to be our 'wow coaster,'" said Valerio Ferrari, president of Central Amusement International, which operates Luna Park.

Mr. Ferrari recounted a vacation he took in Lisbon during which he stumbled upon Coney Island T-shirts for sale. "What does Coney Island have to do with Lisbon?" he asked. "It is just the international symbol for fun, the birthplace of the amusement industry."

Gary Slade, the founding publisher of Amusement Today, an industry trade publication based in Texas, agreed. "Coney Island was Disneyland before there was Disneyland," he said. "The return of a loop will be a big deal."

The original Thunderbolt ran from 1925 until 1982 but was sold to a fried chicken mogul and later burned down.

It was eventually bulldozed before dawn one morning in 2000, under the order of Mayor Rudolph Giuliani's administration—a move courts later declared illegal, according to published reports. The house under the Thunderbolt, occupied until 1988, was made famous in Woody Allen's 1977 film "Annie Hall," as the home of Mr. Allen's character, Alvy Singer.

Some locals still smarting from the demolition are happy to see the Thunderbolt's resurrection.

"For the first time in a long time, we'll be able to hold our heads high," said Dick Zigun, who runs Coney Island U.S.A. "This will change our skyline." 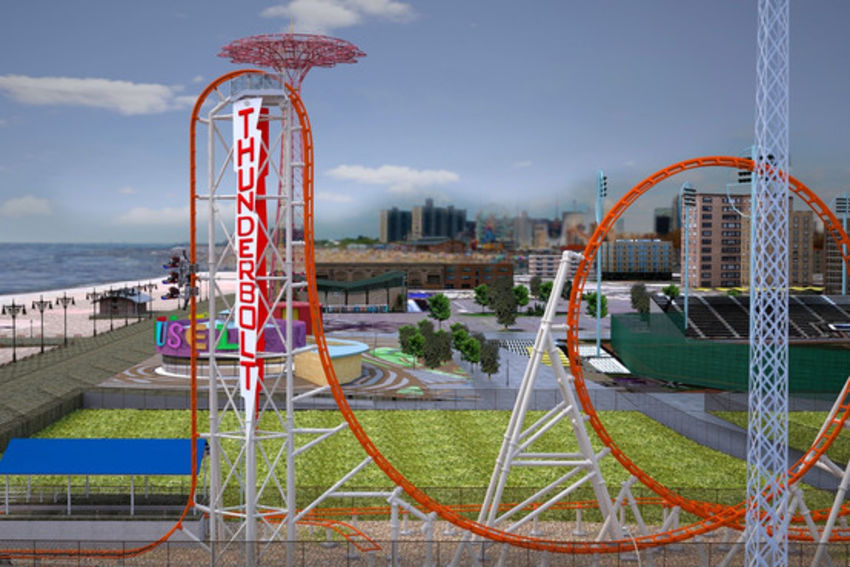