Happiest Place on Earth has become one of the most crowded.

Tourists and annual pass holders are flooding Disneyland and California Adventure in large numbers, causing headaches for guests and park officials. Waits for rides often stretch over an hour, and visitors are having to park in remote structures, particularly on Sundays.

Over the weekend, the Anaheim park raised single-day ticket prices by $4 to $96 and temporarily halted new sales of a popular annual pass for Southern California residents. Disneyland officials say they have no current plans for a new Anaheim park, but that hasn't stopped speculation.

Many longtime park watchers say now may be the time to dust off plans, dating to 2000, to build a third park on a 78-acre site just south of Disney's complex on Harbor Boulevard.

Those plans were shelved while the company focused on the 2001 opening of Disney California Adventure, which fell short of expectations until a $1-billion expansion in 2012 added the hugely successful Cars Land.

After Disney acquired Marvel Entertainment Inc. in 2009 and Lucasfilm in 2012, many fans hoped a third park would feature Marvel superheroes or characters from the "Star Wars" franchise.

"Maybe they'll do Star Wars Land or Indiana Jones Adventure or Marvel characters," said Todd Regan, founder of the Disney blog site MiceChat.com. "It will be interesting to see what happens."

At least for now, Disneyland officials say they are focused on expanding parking. They're buying a lot at the corner of Harbor Boulevard and Ball Road with room for 1,400 parking spaces for employees, freeing up more parking for guests.

"Our goal is to always provide the best possible experience for all of our guests, and we will continue to look for ways to achieve the right in-park balance," said Disneyland spokeswoman Suzi Brown.

Industry experts say Disney might be better off focusing its attention on other theme park projects, including a $4-billion resort in Shanghai, slated to open next year.

"They've got a lot on their plate," said Dennis Speigel, president of International Theme Park Services in Cincinnati.

Disneyland does not disclose attendance numbers. But estimates from Aecom, a Los Angeles engineering and consulting firm, show visitor numbers have increased nearly every year from 2004 to 2012.

And they're continuing to rise. Disney reported a 18% increase in operating income from theme parks and resorts for the six months ending March 29.

The attendance surge comes as the nation's travel industry enjoys a surge in spending as the economy continues to rebound from the recession and a more recent lull in travel during winter storms on the East Coast and in the Midwest.

Speigel said theme parks across the country could see double-digit increases — as much as 25% — in attendance this year.

But it was Disneyland's suspension of sales of its $379 Southern California Annual Passport that is expected to play the biggest role in reducing crowds. The pass offered access to the park 215 days of the year, including Sundays.

"Pass holders use the park differently than others," said Adrienne Vincent-Phoenix, an annual pass holder and chief executive of the Disney fan site MousePlanet.com. "You go to the park like you would go to hang out at the mall with your friends."

The move to suspend sales of the annual passports, industry experts say, is an attempt to reduce Sunday numbers and encourage local residents to visit during the week, when crowds are smaller.

Disney continues to sell a $289 annual pass — not including weekend visits — for Southern California residents. Disneyland officials say they have no plans to suspend the sales of any other passes.

It's not the first time Disneyland has tried to ease crowding through price increases. Two years ago, the park raised rates for one of its most expensive passes, allowing access 365 days a year, to $649 — a 30% increase. It didn't work.

"It's a challenging situation," said John Gerner, managing director of Leisure Business Associates, a theme park consultant. "Disney doesn't want to be seen as taking advantage of customers, but they have an obligation to try to make as much profit as possible from their park."

Other pass holders complained that the park has not added new attractions to justify the higher prices.

"Nothing has really changed or been added in years," said annual pass holder Ken Bruce, a longtime fan and visitor to Disneyland.

Bruce owns the cheaper Southern California annual pass that blocks out weekend admission. But he worries that Disneyland may consider suspending his pass to make room for high-spending out-of-town visitors.

"By and large, annual pass holders have a very strong emotional connection to the park and know the history," he said. "To go for that blind money grab seems they are not paying attention to us." 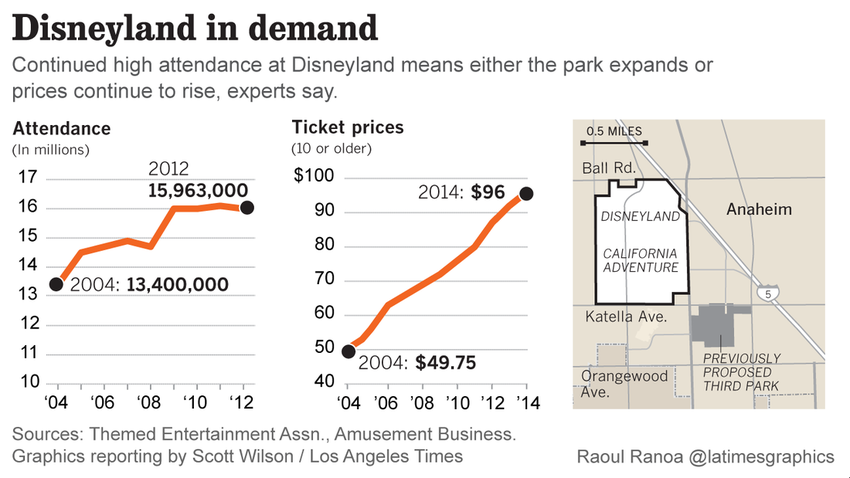