"Get ready to be dazzled," invited Tom Staggs, Chairman of the Walt Disney Parks and Resorts, as he took the stage Wednesday night before a crowd of invited media and Disney Parks Blog readers. The after-hours event was billed as an exclusive first look at Disneyland's 60th anniversary celebration, and fans and reporters filled Main Street, U.S.A. for the long-awaited announcements.

15 minutes later, the crowd was buzzing about three new entertainment offerings announced for the Diamond Celebration, officially scheduled to begin on May 22, 2015, but it seems that this party may still be very much a work in progress.

Though we have more details about the new parade, new fireworks and new version of World of Color, Disney officials had nothing to say about the extensive refurbishments that have major rides and even entire lands closed for weeks and months in both parks; about rumored special events like 24-hour parties to kick off the celebration or mark the actual anniversary date; or about merchandise or collectibles planned for the anniversary.When asked when the Resort planned to make additional announcements about the anniversary, one park spokesperson just advised that reporters keep an eye on the Disney Parks Blog every day for updates.Still, the evening did provide quite a lot to be excited about if you're a fan of Disney's nighttime spectaculars. Watch this video for a look at what's in store from the entertainment division, and keep reading for more details about the three new shows. 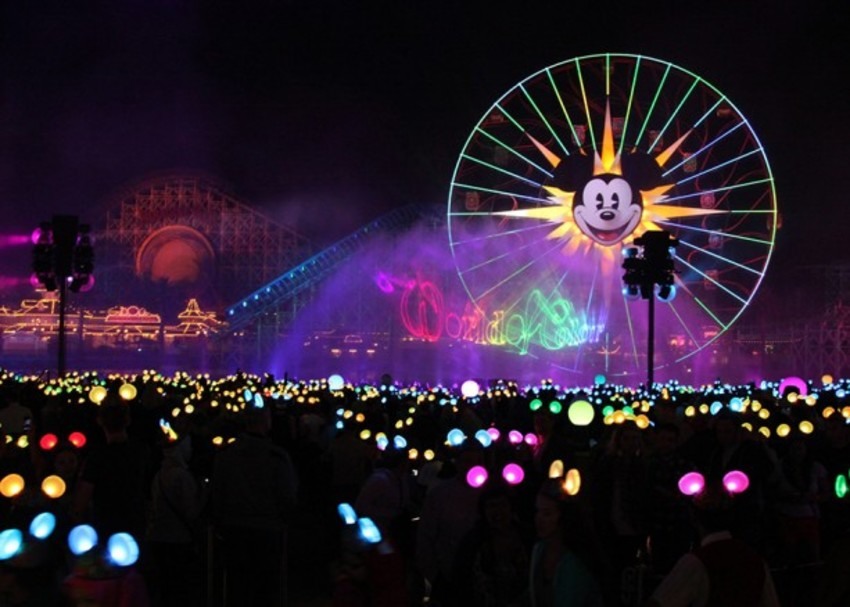 World of Color – Celebrate! The Wonderful World of Walt Disney

Steven Davison is often referred to as the "human firework" for his energetic presentations to Disney executives, a nickname which is also conveniently shorter than his official title of "Lead Creative Executive of Parades and Spectaculars for Walt Disney Creative Entertainment." Davison joined Staggs on stage at the event to introduce an anniversary update for the World of Color show at Disney California Adventure. World of Color – Celebrate! The Wonderful World of Walt Disney is a completely new version of the popular nighttime show, featuring Mickey Mouse as host. Disney says the show, "will take guests on an inspirational journey through the unparalleled imagination of Walt Disney, exploring his decades-long legacy of memorable animated moments and the dream of Disneyland Park." 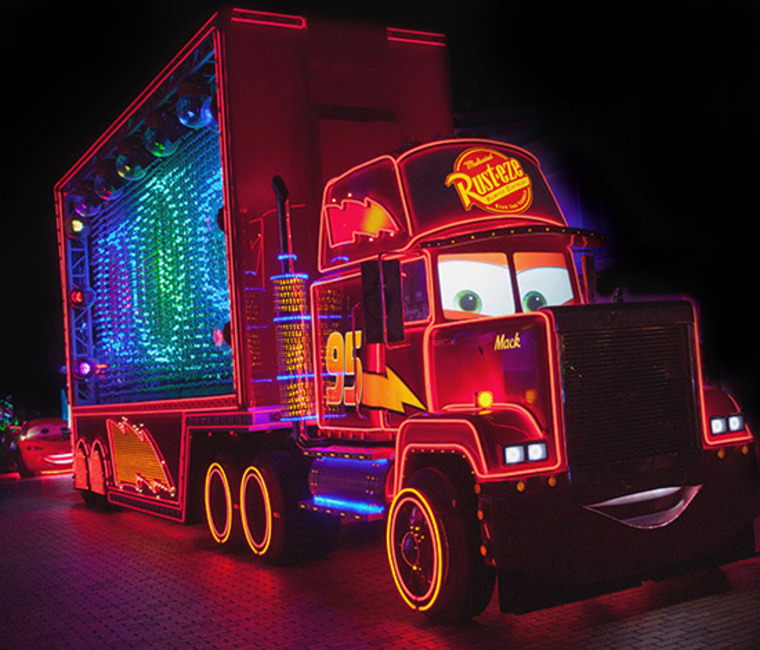 It won't be the parade we grew up with, but an electrical parade will return to Main Street, U.S.A. for Disneyland's 60th anniversary. Steve Davison says Paint the Night is a "parade for a new generation, inspired by the original." If you've heard the name before, that's because Paint the Night debuted at Hong Kong Disneyland in September, 2014. Davison says the two parades were created in tandem, and that the Disneyland edition will be similar, but not identical, to the Hong Kong version.

Fans of the original Main Street Electrical Parade will be pleased to know that the iconic Baroque Hoedown theme is used in Paint the Night, though Davison describes the arrangement as "fresh" and "wild." Another nod to the original parade is the oversized drum float which served as the opening title for the procession.

Paint the Night is the first all-LED parade at the resort, with over 1.5 million individually-programmed lights. Lighting on the floats, and even costumes of the 76 performers, will be computer controlled. Senior Show Director John Addis says the parade is "brilliant," and Davison commented that the floats have the ability to illuminate the buildings around them. 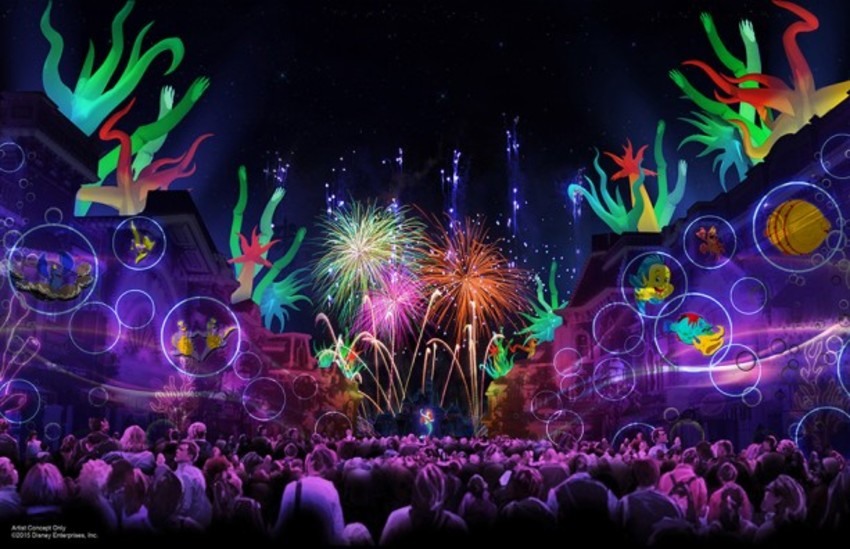 Steven Davison is best known to many Disney fans for his pyrotechnic productions, and the Disneyland Forever show looks to be his multimedia masterpiece. Not content just to fill the sky with fireworks, Davison is using "the largest installation of projection mapping technology in a Disney park" to project animated effects on Sleeping Beauty Castle, "it's a small world," the Matterhorn, Tom Sawyer Island and all along Main Street U.S.A. during the show.Event attendees were treated to a preview of the projections on Main Street, and a sample of "Live the Magic," the new theme song for the show.

Disney Legend Richard Sherman wrote the closing song for Disneyland Forever, a song that Steven Davison promises will make the audience tear up when they hear it.

Based on concept art shared with the media, it looks like Disneyland Forever will also incorporate inflatable props along the rooftops on Main Street, a first for a Disneyland parade. We were told that the Diamond Celebration entertainment would continue during the 2015 holiday season, but it was not made clear if this means Paint the Night would be presented with or instead of A Christmas Fantasy Parade. 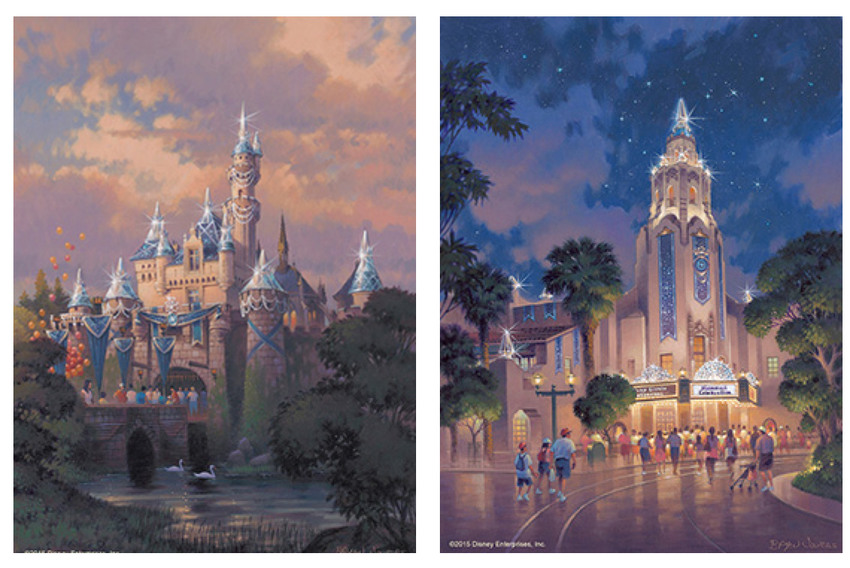 Sleeping Beauty and Carthay Circle Theater getting the diamond treatment

Disney did not give an end date for the 60th anniversary events, but a spokesperson quipped, "it's going to be a loooong celebration." These types of marketing campaigns usually last 15-18 months, but it won't be a surprise if Disney keeps the party going two years or even longer, to bridge the gap until a major new attraction or addition is announced.Getting details from Disney about the 60th anniversary celebration has been a bit like mining diamonds – an awful lot of effort for a little piece of rock. The three productions revealed tonight all look like gems, and we hope the rest of the plans – whenever they're finally announced– are equally compelling.If you've been waiting to make your hotel reservations for the start of the celebration, you now have official dates. And if you're content to let the party start without you, there's no rush – these diamonds may not be forever, but they'll be around a good long while.