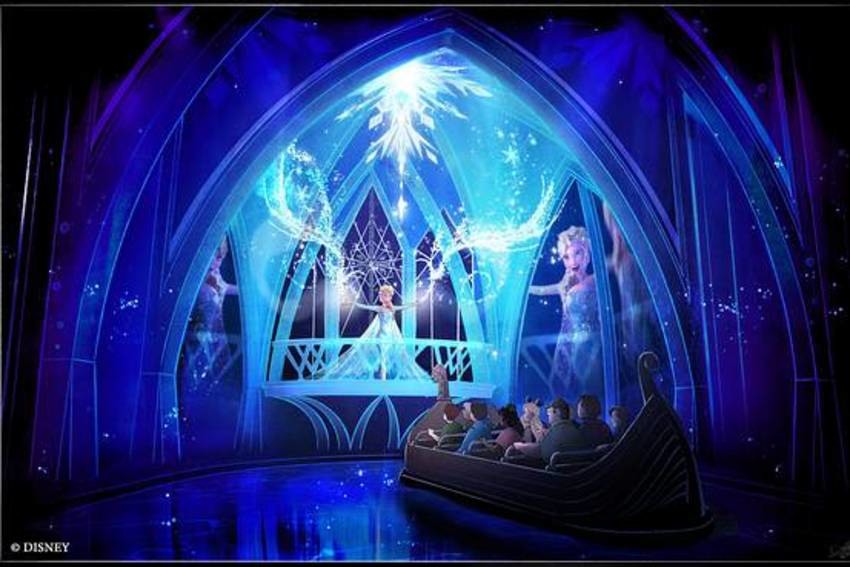 Anna, Elsa, Kristof, Olaf and even those adorable little Snowgies are taking residence in Epcot Center next year in a new ride Disney is calling "Frozen Ever After."

Imagineers at the company's headquarters in California gave Speakeasy a first look at the attraction, which will replace the 27 year-old Maelstrom ride at the Norway pavilion in Epcot next year. The tour came courtesy of Imagineering creative executive Kathy Mangum, who oversees the Walt Disney World Resort. She showed off storyboards for the attraction and a virtual tour in a room called the "DISH" that utilizes 3-D images projected on the walls, ceiling and floor to simulate a ride before it is built."What we try to do is take you back to the movie without retelling that story," Ms. Mangum said of "Frozen Ever After." "This is a celebration of the characters, a way for guests who love the film to experience it in a completely different way."

While it doesn't feature any new songs, there are several new lyrics to existing melodies written for "Frozen Ever After" by movie composers Robert Lopez and Kristen Anderson Lopez.Maelstrom, on which visitors ride a floating log on a tour through Norwegian mythology, has been "gutted," Ms. Mangum said, and is currently getting "a whole new overlay with 'Frozen.'" While the logs and the path will remain the same, everything you see along the way is being replaced.The setting for "Frozen Ever After" is the winter festival that takes place in summer, when residents of Arendelle apparently celebrate their favorite season of the year in the midst of its polar opposite.

While waiting on line, which is sure to take longer than the four-minute ride, visitors will walk by Wandering Oaken's Trading Post. The trader with the thick accent will occassionaly clear steam on the windows to utter a hearty "yoo-hoo!" to people walking by. "We consider this scene one," Ms. Mangum said.Once they board their logs, "Frozen Ever After" riders will first see goofy snowman Olaf and equally goofy reindeer Sven setting up the Winter Festival premise.Next is a stop at Troll Valley, where Grandpappy Troll tells a gathering of children the story of how Anna and Kristof met, before the log goes up a ramp to find Olaf again, singing a song while ice skating, right next to Anna and Kristof, who are singing with their friend Sven.

Behind a set of doors is the moment any visitor is sure to be waiting for: Elsa, on a balcony, singing "Let It Go" in her ice castle. It's the centerpiece of the ride, "the big, big scene," Ms. Mangum said, and it features elaborate effects to create simulated snow crystals soaring around the room.Visitors will next ride by Marshmallow, the giant, formerly evil snowman from "Frozen" and his miniature Snowgie pals, who show up in the short "Frozen Fever," which ran in front of March's "Cinderella."Marshmallow himself yells "Let It Go" in time with Elsa's song before the log travels through a mist cloud and reaches the final scene, which includes fireworks and a wave from Elsa, Anna, Olaf, Sven and Kristof.

The audio-animatronic characters will be cutting edge, Ms. Mangum said, using a new technology that includes projectors behind the faces to enable more lifelike animation. It was first used on the Seven Dwarfs Mine Train ride that opened in Walt Disney World's Magic Kingdom last year.Disney executives and designers started discussing a "Frozen" ride before the film even came out, said chief operating officer Tom Staggs, who ran the theme park unit until February. But "our urgency grew as the film really took off," he said, and "we purposefully set a really audacious goal to get this thing done." That's one of the reasons why it's a makeover of Maelstrom, rather than an entirely new attraction that would take longer to build.The company is counting on "Frozen Ever After" to boost the popularity of Epcot, where attendance was essentially flat between 2009 and 2013, the most recent year for which data are available, according to the Themed Entertainment Association. "Cars Land" did the same for Disney's California Adventure theme park, which struggled before an area based on the Pixar movie opened in 2012.Of course, some may question whether the the fictional world of Arendelle belongs in Epcot's World Pavilion, which has always been about touring countries that actually exist, like Japan, Mexico, and Norway.But Mr. Staggs argued that "Frozen Ever After" is sure to draw more visitors to the Norway Pavilion, and Epcot as a whole, and that the movie is in fact based significantly on Scandinavian culture, art and mythology."If the goal is to give people a taste of something like Scandinavia with the Norway pavilion, then 'Frozen' would only increase the extent to which people would be drawn to it," he said. "To me it doesn't seem out-of-character at all."