The new daily parade at Magic Kingdom has debuted, and it's stocked with dozens of Disney characters and a set of new detailed floats. Here are five thoughts we had while watching the parade come down Main Street.

1. "Wow, this thing is moving right along." There are many moving parts on the floats, both big and small, high and low. A notable early example are the "swing thugs" aboard the swaying pendulums on the "Tangeled" float. It looks daring. The first float (aka The Princess Garden) has a rotating round platform (think lazy susan) that lets both sides of the street see Tiana and Naveen ("The Princess and the Frog"), then the "Frozen" sisters, Anna and Elsa. So much is moving that you want to watch the float even after it's passed by.

2. "Wow, that's a long way to be doing a Scottish jig." The ground-level dancers are earning their pay, including the kilted folk from the "Brave" float and the "Newsies"-inspired Lost Boys fronting the "Peter Pan" float. Even the guy controlling the tail of the dragon has choreography.

3."Wow, that's high." The height of the units is notable, and there are cast members up in the atmosphere. The tallness factor would seem to back the rumor that new Christmas decorations will be needed across Main Street, which has had garland crossing that area.

4. "OK, just wow." When the steampunkish dragon turned the corner and came into view, a roar went up. Followed by another roar when it breathed fire. Once Universal Studios gets its fire-breather into place at Wizarding World of Harry Potter -- Diagon Alley, Orlando will once again be home of dueling dragons.

5. "Wow, top that." The parade starts off strong and builds in intensity. So what grand finale can follow fire-breathing dragon? Mickey and Minnie in a hot-air-balloon float, preceded by Piocchio, Snow White, Seven Dwarfs (including a doubled-up dwarf), dancing hippos, Mad Hatter, Pluto and more. It's a classic Disney ending.

Of course, it has that new-parade smell, with bright costuming and soaring soundtrack. That will fade one day, but for now most folks will say "Celebrate a What Come When parade?" The new parade runs at Magic Kingdom daily at 3 p.m. 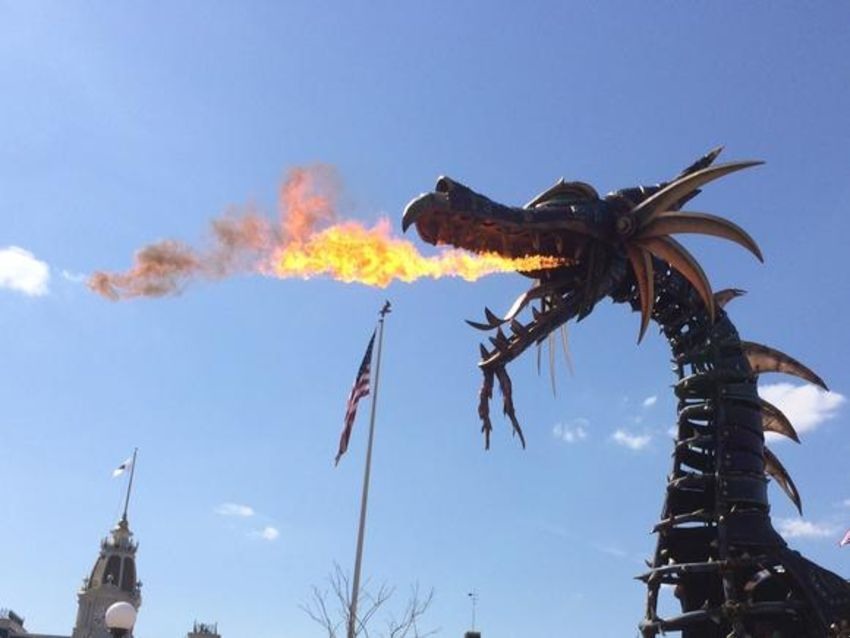