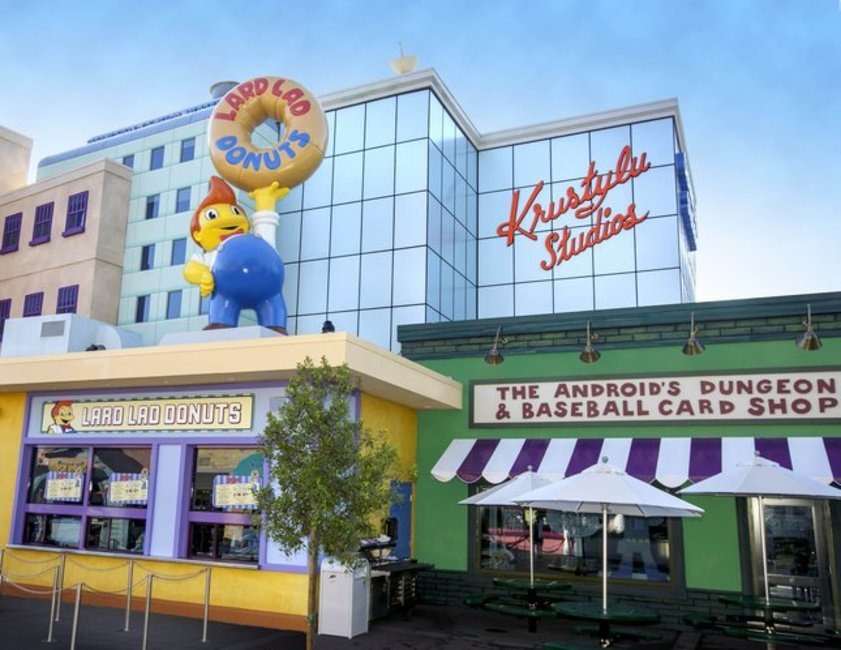 It has been called "America's Crud Bucket" -- a town where the police department is run by a meat-headed moron, the most famous celebrity is a boozy clown and the nuclear power plant is forever on the brink of a disastrous meltdown.

Ah, Springfield, the colorful home of "The Simpsons." You certainly wouldn't want to live there, but it seems like a rip-roaring place to visit.

Fans of America's favorite cartoon family can do just that at Universal Studios in Hollywood, where Springfield has been brought to life in all its kooky, quirky, zany glory.

Set for a May 13 grand opening, the new themed area -- located adjacent to Universal's popular The Simpsons Ride and carnival games -- is designed to fully immerse guests in the world of Homer, Bart, Marge and the whole bright-yellow-skinned bunch. It features a number of iconic landmarks made famous over the show's 26 seasons, including Springfield Elementary School, Comic Book Guy's Android's Dungeon, Moe's Tavern, the Kwik-E-Mart and much more.

"This will be a must-see experience for 'Simpsons' fans all over the world," says Mark Woodbury, president of Universal Creative. "In spectacular fashion, guests will be able to enter an animated world that they've only seen on television -- and we're really excited to bring that world to life."

The Springfield area is part of a massive alteration of the park layout at Universal, which is celebrating its 50th anniversary. Arriving in June is the Fast and Furious -- Supercharged thrill ride inspired by the blockbuster film franchise. In addition, Universal is offering its first-ever Nighttime Studio Tour this summer. It's all prelude to the highly anticipated 2016 opening of The Wizarding World of Harry Potter.

Now back to Springfield. I had a chance to tour the "Little City That Tried" -- while still under construction -- with project coordinator Jon Corfino, who describes himself as a huge "Simpsons" devotee. The goal, he points out, was to bring a three-dimensional quality to the town's famous structures.

"Obviously, you can't make it REAL real, but at least you don't want to have it where it's all flat and cartoony," he says.

Mission accomplished. After passing through an entry portal, the vibrant Springfield landscape opened up before me: Green hills adorned with the town's name spelled out in 40-foot high letters, a la the Hollywood sign; the grim walls of the Springfield Penitentiary; the massive mansion of Mr. Burns; the gleaming windows of Krustylu Studios. They're vividly evocative -- and smile-inducing -- sights.

In all, this "authentically fake" town is made up of 24 multilevel building facades, of which 14 are new and unique to Universal Studios Hollywood (the Florida park also has a Springfield). As guests roam the area, they'll hear original music from the show playing in the background.

And what would a true Springfield experience be without food? Patrons can choose from nine new eateries here, including Luigi's Pizza, Cletus' Chicken Shack and Phineas Q. Butterfat's Ice Cream Parlour. Among the Homer-endorsed delicacies available in Springfield are the Clogger -- a double-patty hamburger with bacon -- served at Krusty Burger, an ice-cold Duff beer, a nonalcoholic Flaming Moe that billows smoke and, of course, sweet sugary doughnuts. Mmmmmm!

Corfino says Universal worked closely with "The Simpsons" creator and executive producer Matt Groening, and his team of collaborators, on every aspect of the new Springfield. The result is an impressive level of detail that surely will please even the most picky "Simpsons" connoisseur.

"Obviously, there's a lot of emotion involved in a project connected to a hugely successful show that has been a big part of our lives for a long time," Corfino says. "It's been a real hoot."

Cowabunga, dude -- and eat your heart out, Shelbyville.