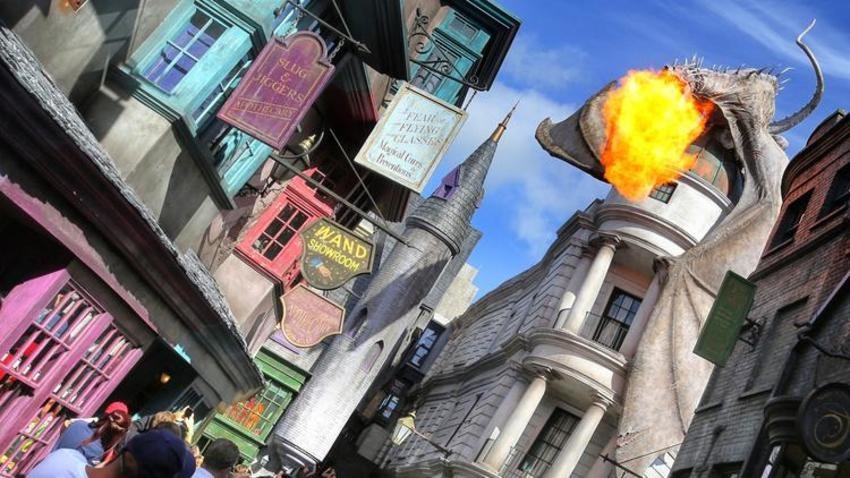 Year-over-year attendance at the park spiked 17 percent in 2014, according to the estimates from consulting firm AECOM and the Themed Entertainment Association.

"Obviously Universal Studios is hitting it out of the park," said Brian Sands, vice president in AECOM's economic practice. Universal Studios' attendance — 8.3 million, compared with 7.1 million a year earlier— was boosted by the addition of a Harry Potter land last year. However, Universal Orlando's Islands of Adventure attendance stayed flat at 8.1 million, according to the report.

Islands of Adventure had been expected to benefit from the Hogwarts Express, a new Harry Potter-themed train that visitors could ride only if they had tickets or passes to both Universal parks. "Without the train … that number may have been lower as opposed to being flat," Sands said. "That's really a function of our industry. Visitors go to the new thing." A Universal spokesman had no comment on the numbers Wednesday.

SeaWorld's attendance — at 4.7 million, down 8 percent from the previous year's 5.1 million — has suffered as competitors have opened new attractions. It also has been fighting negative publicity over its killer whales in captivity. SeaWorld spokeswoman Aimee Jeansonne-Becka said in a statement that "TEA/AECOM attendance numbers are estimates and not based on actual numbers."

The theme-park companies do not publicly break out attendance for their individual parks, so industry executives consider the TEA/AECOM estimates a leading source on visitation. "They're not 100 percent accurate, but they're certainly in the ballpark," said Dennis Speigel, president of International Theme Park Services.

Sands said the estimates are based on a variety of factors, including regional trends, addition of new attractions and ticket pricing. Also, he said, "we have the opportunity frequently to have some discussions with the operators as well, to kind of informally chat about where we think the numbers are coming out."