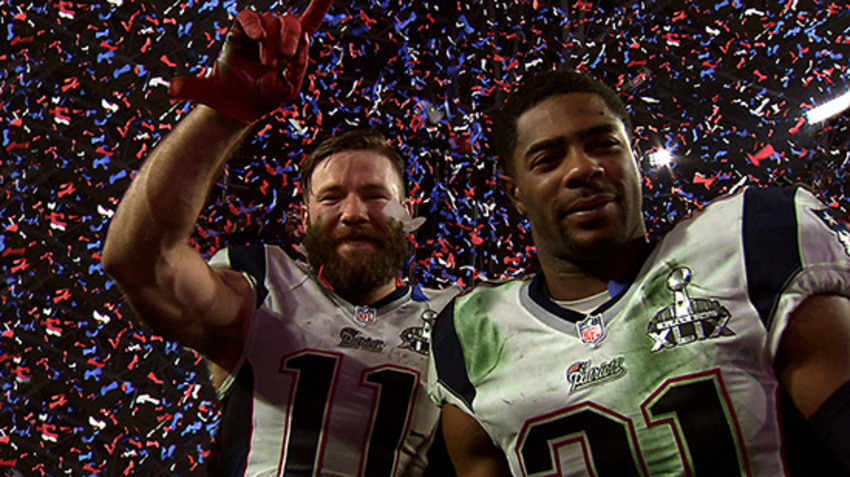 Rising from the frenzied, on-field hoopla moments after their team captured the National Football League championship, Edelman and Butler beamed into the cameras and shouted those four words that for decades have become synonymous with Super Bowl victory celebration.

Edelman and Butler each contributed huge plays for the Patriots in the final minutes of the game, giving New England its fourth Lombardi Trophy. Edelman caught a touchdown pass late in the fourth quarter to give the Patriots the lead and what turned out to be the winning score. Then, with 20 seconds left in the game and the Seahawks on the verge of scoring, cornerback Butler intercepted a pass on the goal line to seal the victory. Edelman's touchdown catch was one of his nine receptions in the game, for 109 yards.

The pronouncement by Edelman and Butler, part of the production for one of TV's most enduring and iconic Super Bowl commercials, was captured within seconds of the final gun. It was the latest episode of the "I'm going to Disneyland" commercial produced over a 28-year span. Fans can see the episode beginning Monday on the Disney Parks Blog.

On Monday, Edelman and Butler are scheduled for a hero's welcome at Disneyland Park with a cavalcade down Main Street, U.S.A., accompanied by Mickey Mouse and in front of cheering park guests and Patriots fans. Following the cavalcade, the Patriots players are scheduled to conduct media interviews.

The last time two players visited a Disney park after winning the NFL championship was 2009, when Santonio Holmes and Ben Roethlisberger led the Pittsburgh Steelers to victory in Super Bowl XLIII.

The first of the "I'm going to Disneyland" commercials appeared in 1987 and featured New York Giants quarterback Phil Simmsfollowing his team's triumph in Super Bowl XXI. The commercial was regarded as a groundbreaking concept – a produced national commercial involving a current event, airing on major networks hours after the event. Since then, the commercial has created a national catchphrase, shouted by people of all ages following moments of great accomplishment.

This latest installment – the 48th in the long-running series – followed a similar script, airing only hours after the conclusion of Super Bowl XLIX on Sunday.